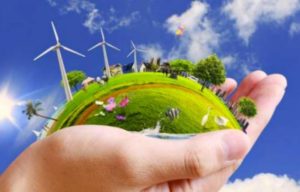 A report by Allied Market Research forecasts that global renewable energy markets are expected to grow at a compound annual growth rate of 4.9% between 2017 to 2025. According to Deloitte, recent growth in renewable markets is driven by consumer demand, particularly corporate procurement. Deloitte explains that the trend is expanding beyond large corporate buyers to small and mid-sized companies, as sustainability measures are demanded by larger corporate entities across their supply chains.

The Corporate Renewable Energy Buyer’s Principles are helping to push this trend forward by providing a framework for the largest corporate energy purchasers in the US to better understand renewable energy markets and leverage their buying power to achieve sustainability goals. In February 2018, AT&T, who recently signed on to the Principles, announced it is investing in 520 MW of wind power through two agreements with subsidiaries of NextEra Energy Resources. Many more examples of investments in clean energy are summarized here. But the private sector is not alone. By the end of 2017, 170 US mayors have pledged support for a transition to 100% renewable energy use in their municipalities.

Mark Jacobson, a renewable energy expert and senior fellow at the Precourt Institute for Energy at Stanford University says that the trend could be global. Jacobson published a report in August 2017 that provided a roadmap for 139 countries to source their electricity supply from renewable sources by 2050. After some pushback questioning the assumptions of his August 2017 report, Jacobson followed up with a new study in the journal Renewable Energy, authored with partners at the University of California at Berkeley and Aalborg University in Denmark, which theorized that those 139 countries could be divided into 20 regions that would utilize energy storage solutions uniquely suited to each region.

The REN21 Renewables Global Status Report of 2017 reveals that the global transition to renewable energy is well under way, with record additions of new capacity, falling costs and the decoupling of CO2 emissions from economic growth for the third year in a row. This report states that renewables are becoming the “least cost” option, and that flexibility in the power system through grid interconnections, sector coupling and enabling technologies (such as Information Communication technology (ICT), storage systems, electric vehicles and heat pumps) are relegating the presumed need for baseload generation to myth status. Despite these positive trends, the REN21 report finds that the pace of the transition is not on track to achieve the goals established in the Paris Agreement to keep global temperature rise well below 2 degrees Celsius.

Still, the global shift towards renewables is even acknowledged by the fossil industry, with Exxon Mobil Corporation reporting to shareholders that they expect global oil demand to plummet by 2040. New advances in transportation also support the shift to renewable energy, including Tesla’s recent announcement that they expect to produce 100,000 new electric semi trucks each year, with orders already in place from corporate giants Pepsico and UPS.

Consumer demand is driving this global shift, let’s keep it up!